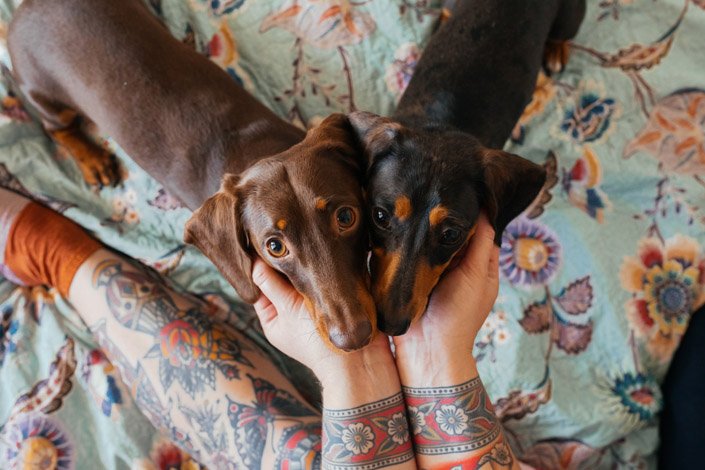 Are Dachshunds Smart? A Long But Short Investigation

They're sassy, sweet, short-legged spunks. But how smart are they?

Are dachshunds smart? It’s the age-old question on the minds of doxie parents the world over. Dachshunds are among the most adorable dog breeds in the world for sure…but what about their intelligence? How smart are dachshunds really?

While the answer to this question may vary among doxie parents, science can help us work out the answer once and for all.

Let’s take a ~weenie~ good look into the matter and see just how smart dachshunds are, compared to other popular dog breeds! 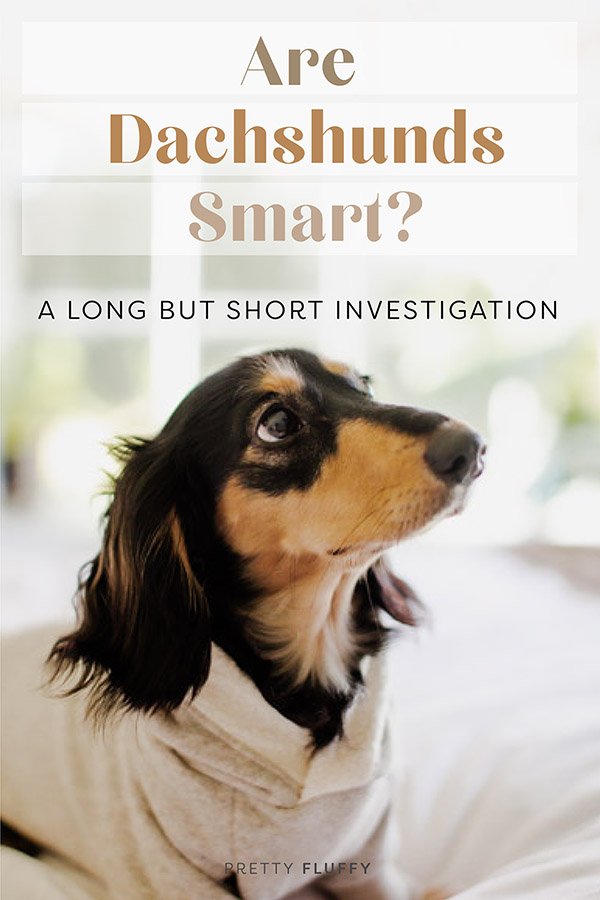 Want the TL;DR? The short answer is yes…dachshunds are smart!

However, the real question is…just how smart are dachshunds compared to other dog breeds? And how is dog intelligence even measured?

A dog’s IQ depends on two factors: the genetics of their breed, and the environment they grow up in. Remember the ol’ nature vs nurture debate? Both sides seem to play a role here.

While it’s true that some dog breeds are genetically predisposed to be smarter than others, if a dog isn’t properly trained, their natural-born intelligence won’t be so obvious.

But wait a minute. How can we actually know which are the smartest dog breeds?

Luckily for us, the canine psychologist and researcher, Stanley Coren, developed a study and created a ranking of the 138 smartest dog breeds! 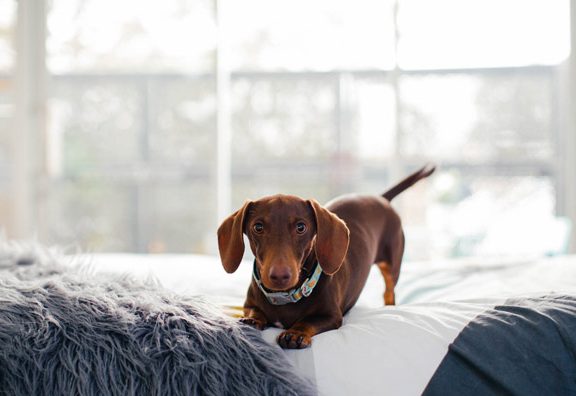 In 1994, the pHD Stanley Coren wrote a book called The Intelligence of Dogs which, in addition to delving into the inner-workings of your dog’s mind, includes a famous ranking of the world’s smartest dog breeds.

To do so, he gathered information from the trial judges of the American Kennel Club (AKC) and the Canadian Kennel Club (CKC). The clubs then provided 199 responses, ranking different dog breeds.

As a surprise to many dachshund parents, doxies ranked #92 out of 138 of the smartest dog breeds. Dachshunds were part of the “average intelligence” dog breeds group. But what does this mean?

According to this study, the breeds that made the “average intelligence” group, including dachshunds, could:

How smart are dachshunds compared to the smartest dogs?

Thanks to Coren’s book, we know that dachshunds rank #92 on the list of smartest dog breeds and are considered to have an “average intelligence”. But what about all the other dog breeds that ranked higher? How smart are dachshunds compared to the smartest dogs?

The top 10 smartest dogs of the list were placed under the “brightest dogs” category, which included breeds such as the german shepherd, golden retriever, rottweiler, poodle, doberman and – no surprises here – the beautiful border collie taking out the top spot.

These super-smart dogs can:

The category following the “brightest dogs” is one called “excellent working dogs”, which includes breeds such as the schnauzer, cocker spaniel, weimaraner and bernese mountain dogs.

These smart and hard-working dogs can: 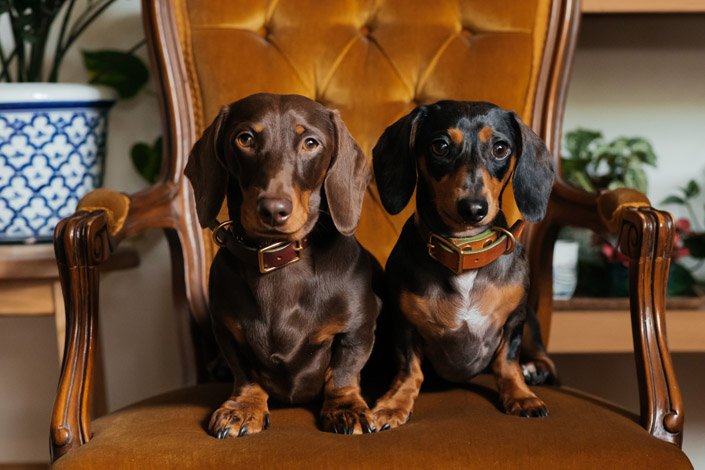 Why do dachshunds rank low in dog intelligence?

So, why do dachshunds rank so low for dog intelligence according to the ‘smartest dogs list’?

When dachshund parents learn why, they might not be so surprised by the ranking after all!

Thing is, the relatively low ranking actually has nothing to do with low intelligence. Let’s see the two main reasons why:

Many dachshund parents agree that their doxies are pretty stubborn! This means that if they don’t want to do something, it ain’t gonna happen – no matter how many times you repeat the same command.

This is a big part of the reason why dachshunds performed poorly on the working and obedience intelligence trials devised by Coren.

A dog’s intelligence is defined by three measures:

Now, what’s important here is that Coren only focused on one of these measures to evaluate the smartest dog breeds: working and obedience intelligence.

In order to properly assess this intelligence measure, he looked at:

By running these trials, Coren and his team devised the dog intelligence list with the rankings and categories we mentioned above.

However, the problem with Coren’s methodology is that two measures of dog intelligence were left out of the equation: instinctive and adaptive intelligence.

And, as a matter of fact, dachshunds really shine in these two areas of a dog’s IQ. 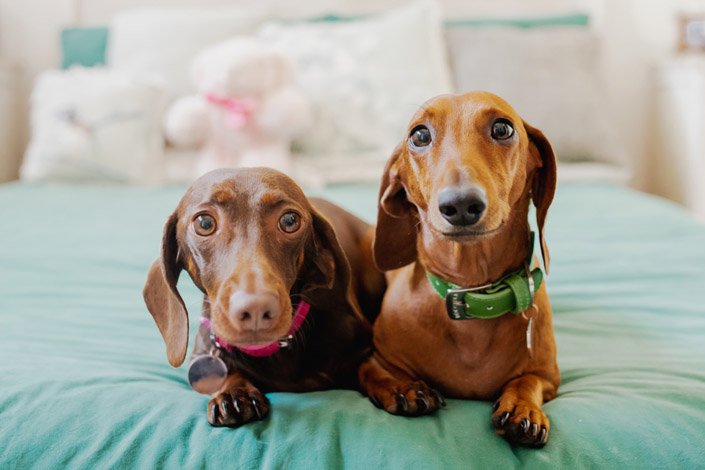 Why dachshunds are smart?

So, while dachshunds might not be the best at working and obedience intelligence, they sure do excel at instinctive and adaptive intelligence.

As we touched on above, instinctive intelligence refers to a dog’s ability to develop the tasks they were bred for, such as guarding, herding and companionship.

In relation to dachshunds, they were specifically bred for hunting badgers. The tiny, long bodies doxies are so loved for means they are always low on the ground, therefore allowing them to pass through small holes to capture their prey.

Although these days you aren’t likely to come across hunting dachshunds in the city, hunting was definitely a skill of theirs back in the day – and still is in some parts of the world.

Therefore, dachshunds’ instinctive intelligence is based on their ability to sniff out, hunt and capture prey.

Adaptive intelligence is a dog’s ability to solve problems on their own and learn things by themselves, without having them taught by humans or their pet parents.

Although there isn’t any scientific research to support the level of adaptive intelligence developed by dachshunds, there is plenty of anecdotal experience from dachshund owners that proves doxies are very good at learning new things by themselves, and solving problems.

Indeed, many dachshund parents claim their doxies can recognise words they benefit from, such as “going for a walk”, “food” or “water”. No one actually taught them to use these words, but thanks to their adaptive intelligence, they learned to positively associate that word with an object or experience they like. 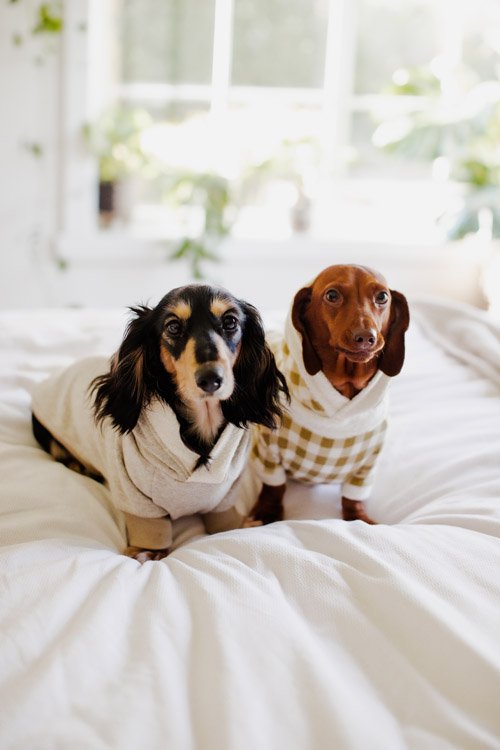 How to measure a dachshund’s intelligence

Want to know how smart your dachshund really is? Here are two games you can play with them at home to find out:

We recommend practicing these dachshund intelligence tests with healthy dog treats that are beneficial for your doxie’s overall well-being.

It’s always a good idea to choose a dog treat that’s best for them, such as multivitamins, joint supplements, allergy relief treats or even calming chews. 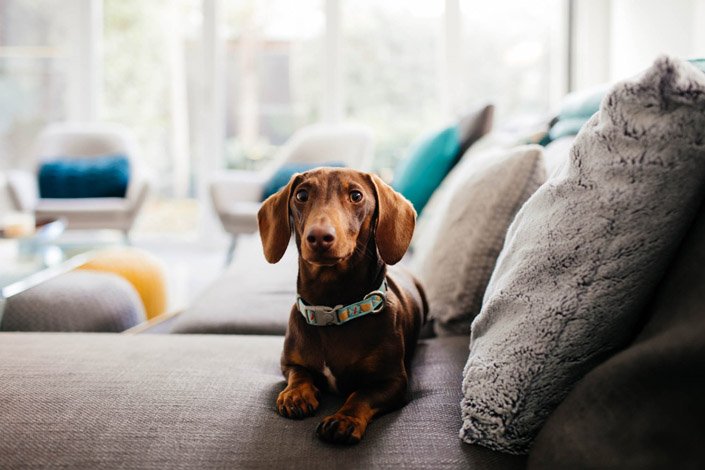 So, if you’ve ever asked yourself ‘are dachshunds dumb or smart?’ the moral of the story is: the more you train your dachshund, the smarter they will be!

Check out our pet lifestyle tips & dog training articles to help you and your doxie live your best lives together.

In the above image, Sushi & Boba are wearing Dear Cooper custom dog hoodies as featured in our post, 12 Designer Dog Hoodies to Keep Your Cool Pup Cozy. 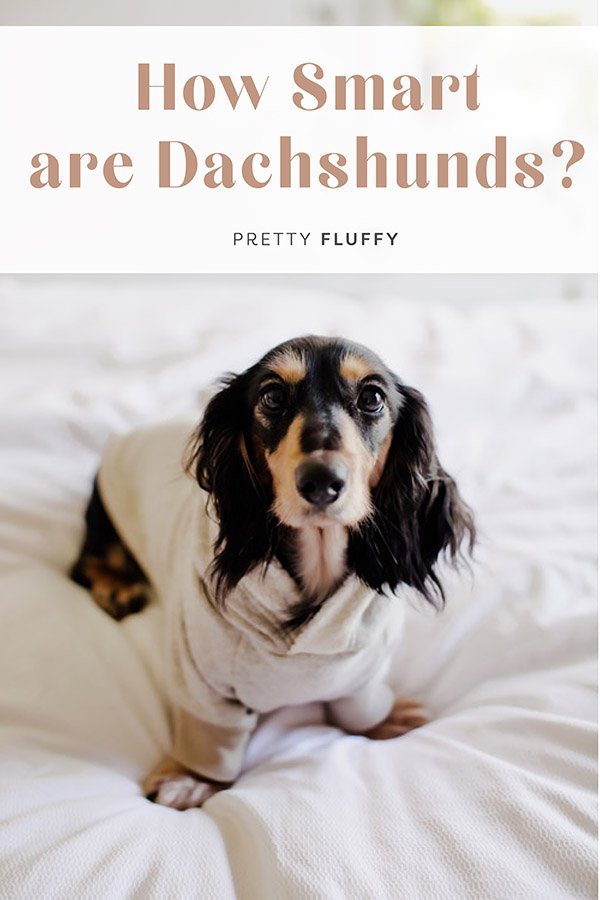 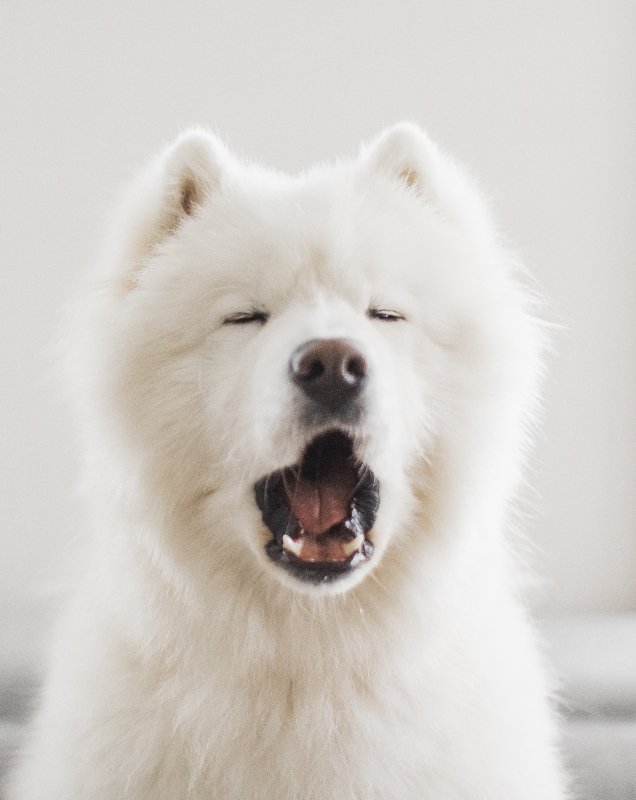 Why Does My Dog Bark At Everything? 6 Common Reasons & How To Fix It 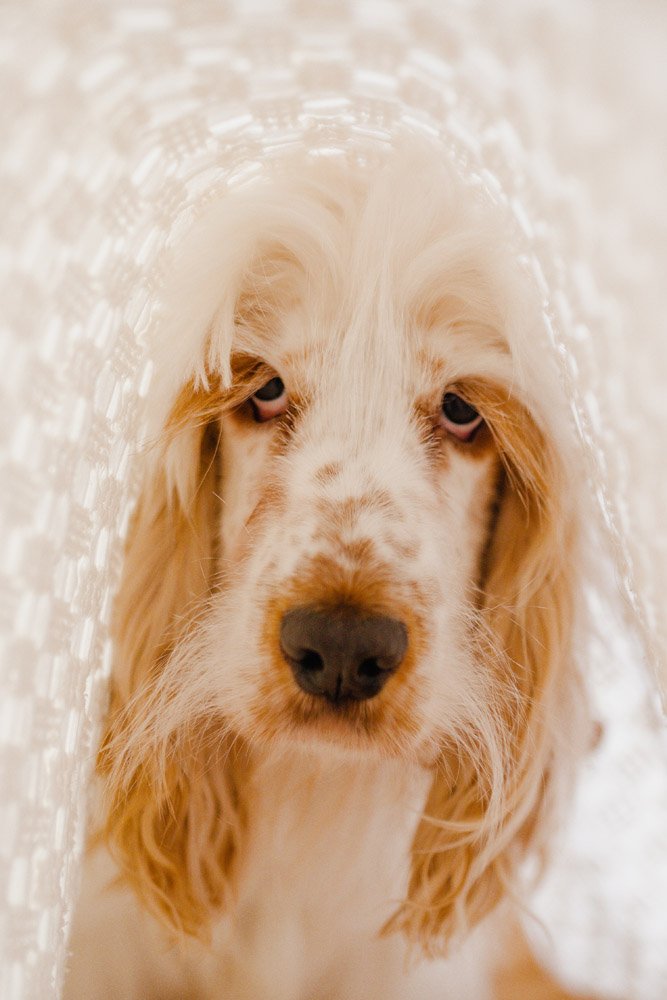 Why Does My Dog Sleep Under the Covers? 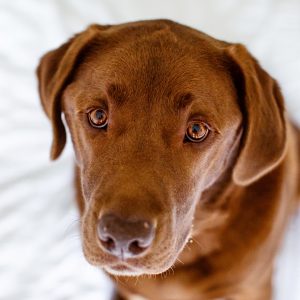 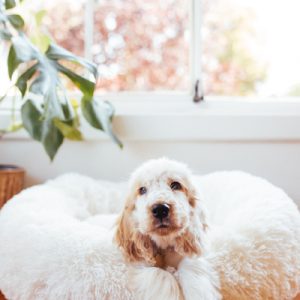 Puppy Training 101: How to Stop Your Puppy Jumping and Biting 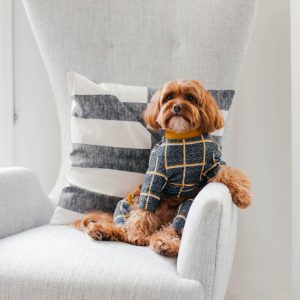 Top 10: The Most Popular Dog Breeds in Australia Revealed 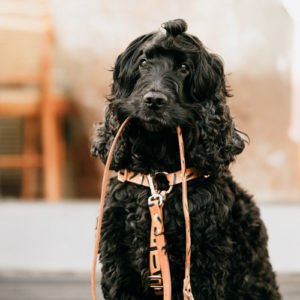