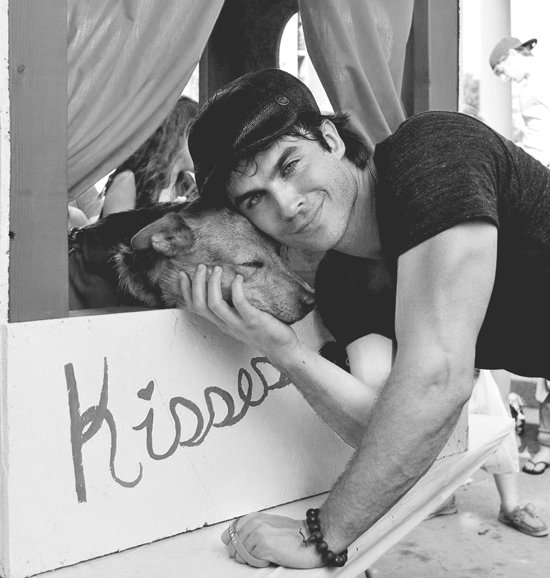 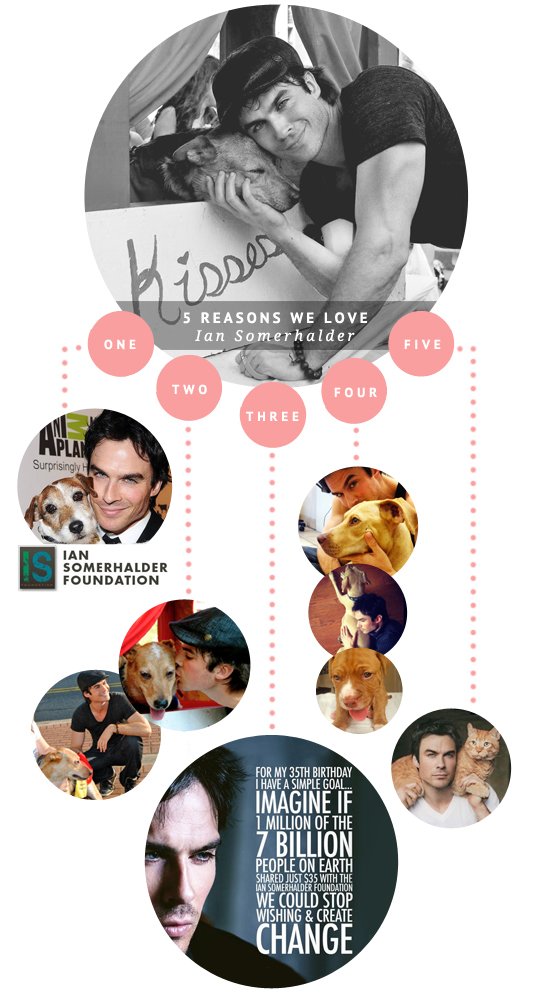 One weekend last fall I started watching Vampire Diaries on Netflix (yes, I’m a few years late to the party). I was about five episodes in when I started wondering who this handsome fella, Damon, was in real life. Enter google, and after just a few minutes he quickly became one of my favorite celebs. Not only is he one of the best looking men in hollywood, it turns out he is a pretty amazing guy too. His selflessness and dedication to the environment, animals, and their habitat is incredibly moving and inspirational.

After that, needless to say I proceeded to watch every Vampire Diaries episode!

I have to admit, I am not one to swoon over celebrities – but in this case, consider me a total Ian Somerhalder fan.  If only every celeb could be this awesome. Here are just 5 of the countless reasons animal lovers love Ian.

Why we love him

1. Founder of ISF, Ian Somerhalder Foundation – Ian’s passion for the earth and all of it’s animals inspired him to start a movement. In 2010 Ian launched ISF, a foundation with a mission to empower, educate and collaborate with people and projects to positively impact the planet and its creatures. In just a few short years ISF has expanded and is now in over 195 counties, each one having their own twitter account. You can visit the ISF website to learn more about how to get involved with this amazing movement!

3. Makes selfless and heartfelt birthday wishes – Since the launch of ISF, every year Ian makes a public birthday wish. It reads: “For my 35th birthday I have a simple goal… Imagine if 1 million of the 7 billion people on earth shared just $35 with the Ian Somerhalder Foundation. We could stop wishing, and create change.” You can’t get more selfless than that. We love his vision!

4. He’s a ‘Rescue Dad’… and Grandpa – Last year Ian rescued a pregnant stray from traffic just outside the Vampire Diaries stages. He took her in and named her Nietzsche. He says, “She is so smart, so beautiful, and charming – all a man could ask for in a girl. So happy together!”.  Ian was by her side for the birth of her puppies and even posted live updates. Though he’s thrilled about becoming a ‘grandfather’, Ian still spreads the message of ending the over population of these amazing animals and is working with ISF to aid prevention. Nietzsche definitely hit the jackpot when it comes to dads, she’s one lucky girl! She even has her own instagram account.

5. Includes his cat in his photoshoots – It’s no secret that Ian loves his cats, he posts photos of them all the time. This latest one being one of our favorites. We love that Ian included his cat, Moke, in his photoshoot for People Magazine’s Sexiest Man Alive Issue. Yep, that’s sexy. Mission accomplished.

We love you Ian!